Can you do me a favor and take a peek at my revamped web site? www.stefanieworth.com 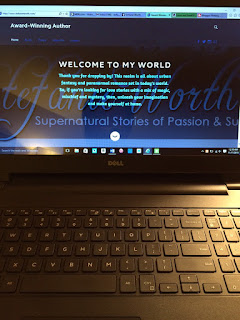 While anything involving the internet competes for the Biggest Time Suck trophy in this writer’s world, sometimes it’s a necessary evil. I can say that after getting two hours of sleep last night. I’m guesstimating I spent upwards of 20 hands-on hours over the weekend migrating my site to its new home at Weebly. This sister is tired, but satisfied.


I updated the look and feel last year, working with Norweigan graphic designer, Ida Jansson of Amygdala Design. For those who’ll ask why I didn’t use a local – or at least U.S. – designer, I’ll say it’s simply because after an exhaustive search of book covers and web sites, she had the design that spoke to me. And in this global technology world, I never would have known she wasn’t sitting right beside me through the whole process. It was that seamless.


So, I had the look, but over time, my site’s functionality has suffered under my personal know-how. I used to build web sites way back in the mid-90s when the World Wide Web was gaining marketing momentum. Those skills carried me during a time when most authors weren’t even thinking about having a site and gave me a promotional head start.


I’ve been able to depend on my own resources all these years, so the fact that Yahoo Sitebuilder was still using very old Java didn't bother me. Much. I’ll pay for design, but not site maintenance, since I could do it myself. (#frugalista) But like everything else, pricing and convenience have received a makeover thanks to technology. My original web site design cost me $300 in 2008 – and took weeks and weeks to complete. It was fun, but far less versatile than what I got for $125 last year – in about one week.


It’s now ditto for site creation itself. Though I’m still willing to spend an entire weekend moving a site, it only took a weekend. I've done overhauls that took me the better part of two weeks to complete with code and all. But this move was entirely WYSIWYG, I didn’t have to code a single item. My functionality has been boosted 300% and I’m paying a few bucks less than I’ve paid for the past five or six years.


I also changed my e-newsletter provider from Constant Contact to MailChimp. I was paying about $40 a month for my list of 500+ contacts. MailChimp is free for your first 2000 contacts. I know, right? I haven’t sent out any messages yet, but a newsletter’s coming.


Stop by www.stefanieworth.com if you get a chance. Leave me a note. Sign up for my newsletter. Buy a book. You know, all that stuff that convinces writers we’re not really crazy for making up stories and talking to imaginary people all day. I appreciate the reality check.
Meanwhile, I'm getting some sleep tonight.
Peace,
Stefanie
Posted by Unknown at 12:16 AM No comments: