Life is filled with scares. Big ones, small ones, imaginary ones, and those we ignore. Which brings me to the topic of my eyes. More specifically, my vision.


My eyes have been wonky for months. But in the way that women do, I made a whole list of excuses as to why the matter was no big deal. After all, life’s been hectic. Nobody’s got time for more problems. My brother passed away in October after a long and courageous battle with pancreatic cancer and I had been plodding away at a book for well over a year, taking breaks to tend to my emotional state, take care of my kids and be with family as necessary.

So between frequent bouts of tears and hours of staring at my laptop screen, I emerged from autumn with bloodshot, scratchy eyes that I attributed first to a reaction to new makeup, then to irritation from seasonal allergies and finally to a lack of sleep. Eventually, I caved in and decided to resolve the issue with Visine. Lots of it. And wearing my sunglasses practically all the time outdoors – even on overcast days – because my eyes had become that photosensitive. I teased my daughter that maybe I was turning into a vampire. Ha, ha.

Then I woke up one morning a few weeks ago feeling like there were tree branches under my eyelids trying to gouge out my eyeballs. It was that bad and not at all funny. Hours later, when the pain refused to relent despite warm towels, Visine and Motrin, I did what I should have done months before and made an appointment with my ophthalmologist.


Turns out, I had something in my eye. Literally: A foreign object was embedded in my cornea. (Insert your favorite emoji here.) So the doctor numbed my eye, took a needle and removed it. No ouch, but much stomach churning. (Again, emoji welcome.) He couldn’t identify it and I had no idea how it found its way past my glasses and deep where it didn’t belong. The thought of the hair-slinging tarantula crossed my mind. While he assured me that a spider wasn’t the culprit, he told me that he thought there was something else going on. Oh.

When I returned a week later to be certain the antibiotics had worked and the cornea was healing, he confirmed his initial suspicions and referred me to a specialist. That guy was the funniest physician EVER, which made me feel a little better about having corneal dystrophy, the dot version specifically. (Here's a video for you visual people.) Turns out it’s possibly genetic, usually shows up between 30 and 70 years old, and most people never know they have it. It doesn’t lead to blindness and generally resolves itself – within a timeframe ranging anywhere from six months to six years.


In the span between that anguished morning of pain and the specialist’s diagnosis, I thought for a hot second about not seeing. What’s it like? I didn’t dwell at all on the “what if?” for myself in particular (because I do believe in speaking things into existence, both good and bad), but I allowed myself to visualize how a sight-challenged writer works. Learning braille to type, using transcription aids, trusting others to help where necessary. It was a fascinating, but brief, exploration that let my imagination explore someone else’s world and, in the end, give thanks for the blessing of good medical care and the ability to pay for all these eye drops I’ll be using until my “dots” go away. 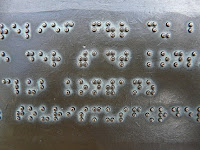 The deep and ethereal edge of this post (since I feel obligated to provide one) would be about fears of the unknown we all face at times and the powerlessness those feelings spawn. Yet, in the end we can vanquish most of the darkness around us simply by turning on a light, so to speak, and taking action: telling someone NO, walking away instead of going the h**l off, or making a long overdue phone call. We don't always get the answers we want, but many times we can get words that make us stop standing around biting our nails and move forward instead.
My scare has passed, but not without granting me a much sharper appreciation for the words I watch coming out of my keyboard every day. The incident has made an indelible impression on my psyche. So, if you ever encounter a character in one of my stories who’s plagued by insect hairs or has issues with his/her vision, well, you’ll know what sparked the idea.


Liner notes: I like music in a variety of forms – old, new, hard, soft, edgy, classic – you get it. So, this  blog’s title is borrowed from the 1970s song (of the same title) by Jackson Browne. So much of that decade’s music was socially-conscious and world-scrutinizing. When you’re young, you can’t even pronounce half the lyrics you hear. Then you grow up and understand the sentiment. Too bad there weren’t music videos back then. Or maybe it’s best to leave pictures to these words up to the imagination.
Posted by Unknown at 10:11 PM No comments: